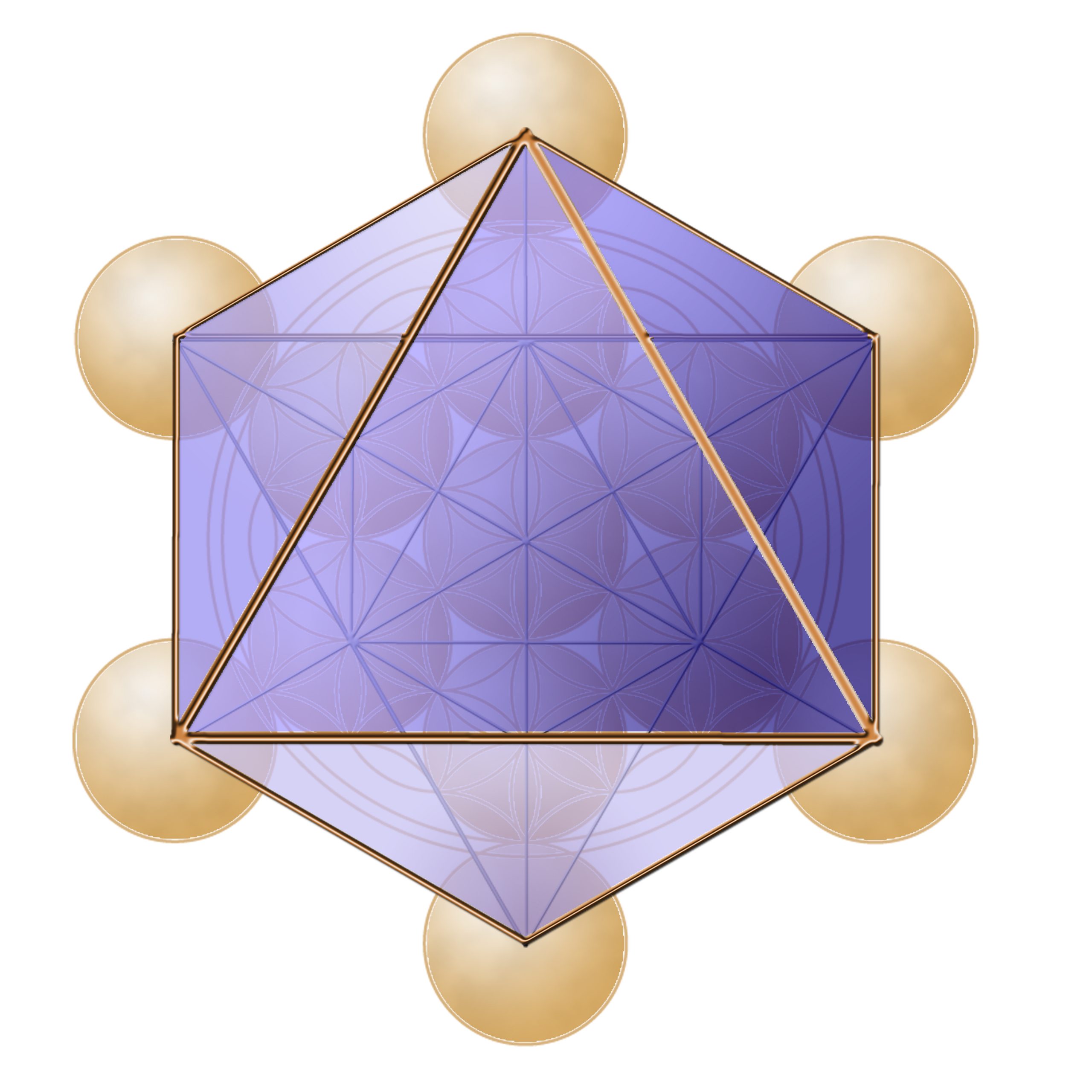 There are only five. There can be no more in three-dimensional reality that fit the parameters of all equality inside of the sphere. They become the very basic patterns of all form. When you begin grouping them together, or slicing off their corners, new, more complex forms emerge. The platonic solids are the 3D Mother/Father principle of all form, and the sphere is the womb that contains them all. First let me introduce you to them. They are: Tetrahedron, Hexahedron (a.k.a the Cube), Octahedron, Dodecahedron and Icosahedron.

Here is where the love story begins. Dodecahedron and Icosahedron are complimentary lovers, and so are Octahedron and Cube. No need to feel sorry for Tetrahedron, as it is its own mate. Magic happens when they come together. Between each of the partners, when one fits itself inside of the other, all the vertices of the inner one touch the exact center of all the faces of the other. As an example, when Cube nests inside of Octahedron, each of Cube’s eight vertices touches the very center of each of the eight triad-shaped faces of Octahedron. Then, when Octahedron nests inside of Cube, the same thing happens with the six vertices of Octahedron touching the six square faces of the Cube. The same type of mating happens between Dodecahedron and Icosahedron, and Tetrahedron with its same type. When one solid begins to grow inside of the other, its points emerge from the faces of its mate and they birth new structures from the emerging constellations. Their children are called Polyhedra.

Each of the five Platonic Solids has an attribute of one of the Five Elements. Tetrahedron is Fire and is the alchemical element for the Phoenix to rise or the gold to be purified. Cube is Earth and mates with Octahedron, which is Air, like Mother Earth and Father Sky coming together. Dodecahedron is the unseen “Ethers” (astral light, or the no thing that connects everything) and Icosahedron is Water, known to have “memory” and transmit information as the Ethers do. The Quintessential Solids live forever in an eternal paradise where they provide the playground of the tangible queen/kingdom in which we play.

*For simple proof of why there are only five Platonic Solids, see this Wikipedia article: http://en.wikipedia.org/wiki/Platonic_solid